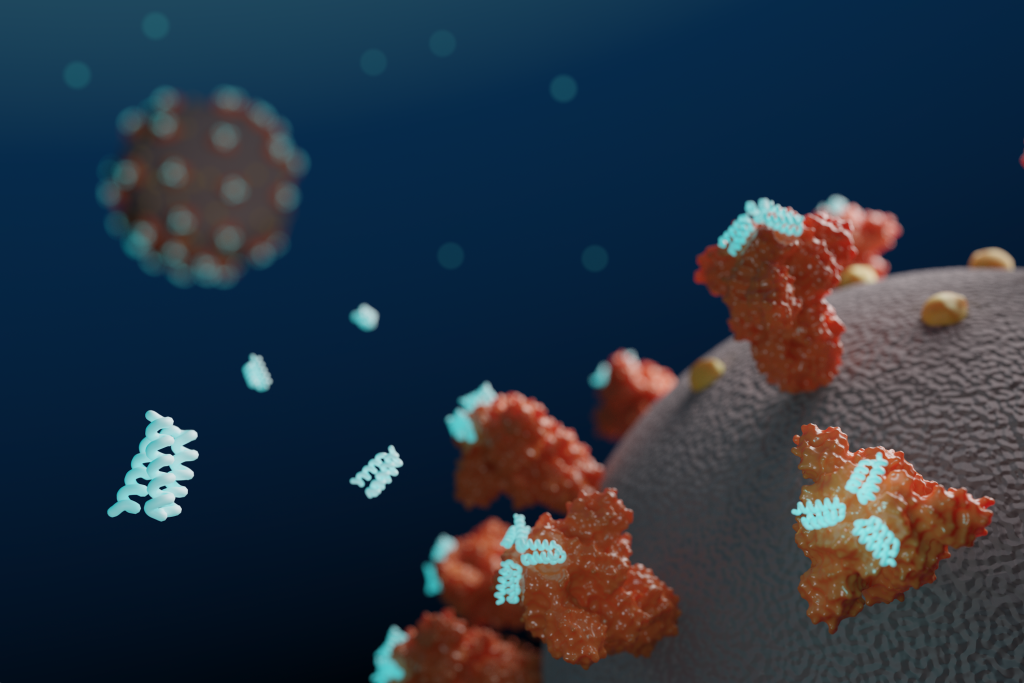 Today we report in Science [PDF] the design of small proteins that protect cells from SARS-CoV-2, the virus that causes COVID-19. In experiments involving lab-grown human cells, the activity of the lead antiviral candidate produced (LCB1) was found to rival that of the best-known SARS-CoV-2 neutralizing antibodies. LCB1 is currently being evaluated in rodents.

This work was conducted in collaboration with the Veesler lab at UW Medicine and the Diamond lab at Washington University School of Medicine in St. Louis.

Coronaviruses are studded with so-called Spike proteins that latch onto human cells, leading to infection. Drugs that interfere with this process may treat or even prevent infection. Researchers at the IPD used computers to design new proteins that bind tightly to SARS-CoV-2 Spike protein, interfering with its ability to infect cells. Beginning in January, over two million candidate Spike-binding proteins were designed on the computer, and over 118,000 were produced and tested in the lab.

“Although extensive clinical testing is still needed, we believe the best of these computer-generated antivirals are quite promising. They appear to block SARS-CoV-2 infection at least as well as monoclonal antibodies but are much easier to produce and far more stable, potentially eliminating the need for refrigeration.”

The researchers created antiviral proteins using two approaches. First, a segment of the ACE2 receptor, which SARS-CoV-2 naturally binds to, was incorporated into a series of small protein scaffolds. Second, completely synthetic proteins were designed from scratch. The latter method produced the most potent antivirals, including LCB1, which is roughly six times more potent on a per mass basis than the most effective monoclonal antibodies reported thus far.

To confirm that the new antiviral proteins attached to the coronavirus Spike protein as intended, the team collected snapshots of the two molecules interacting using cryo-electron microscopy. These experiments were performed by researchers in the laboratories of David Veesler, assistant professor of biochemistry at the University of Washington School of Medicine, and Michael S. Diamond, the Herbert S. Gasser Professor in the Division of Infectious Diseases at Washington University School of Medicine in St. Louis.

This work was supported by the National Institutes of Health, Defense Advanced Research Projects Agency, The Audacious Project at the Institute for Protein Design, Eric and Wendy Schmidt by recommendation of the Schmidt Futures program, Open Philanthropy Project, an Azure computing resource gift for COVID-19 research provided by Microsoft, and the Burroughs Wellcome Fund.