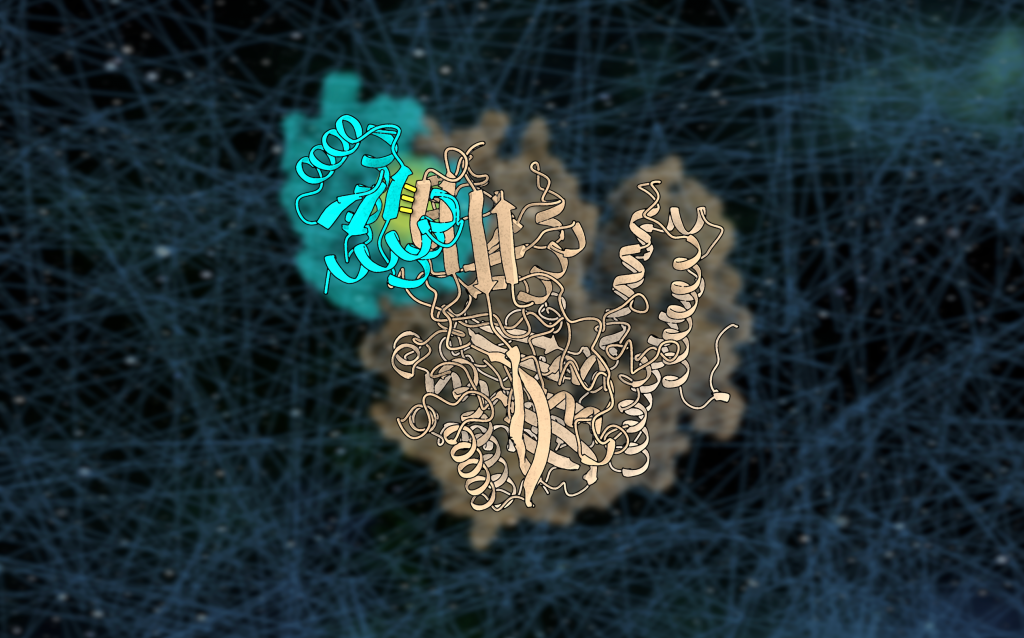 In a new paper, we describe a general approach for designing proteins that bind to exposed polar backbone groups at the edge of beta sheets with geometrically matched beta strands. We used this approach to create small proteins that bind to an exposed beta sheet on the human transferrin receptor, which shuttles interacting proteins across the blood–brain barrier. Our hyperstable receptor-binding proteins cross an organ-on-a-chip model of the human blood-brain barrier, opening up new avenues for delivering drugs into the brain.

The relative orientation of the edge strand and flanking helices on our designed protein scaffolds were important for success. Truncation of the base binder scaffold and addition of helices yielded scaffolds with improved binding metrics when docked. Inspection of other edge strand–containing targets suggests that the overall structural context of the target edge strand is often similar to that in human transferrin receptor. Exhaustive sampling of the positions of helices relative to the edge strand on a designed scaffold should give rise to a family of scaffolds that can engage a large number of edge strand–containing target proteins.

Given the high stability and modularity, and likely robustness to genetic fusion and chemical coupling, our designs could have a distinct advantage over larger more complicated molecules for fusion/coupling to therapeutic cargoes.

Lead author Danny Sahtoe is a recipient of both a European Molecular Biology Organization long-term fellowship and Washington Research Foundation Innovation Fellowship. This work was also supported by the National Institutes of Health, a gift from Gates Ventures, the Donald and Jo Anne Petersen Endowment for Accelerating Advancements in Alzheimer’s Disease Research, an NIH Director’s Early Independence Award and Burroughs Wellcome Fund Career Award for Medical Scientists, and funding from the Wyss Institute for Biologically Inspired Engineering. This work is based on research conducted at the Northeastern Collaborative Access Team beamlines, which are funded by the National Institute of General Medical Sciences from the NIH. The Pilatus 6M detector on 24-ID-C beamline is funded by an NIH-Office of Research Infrastructure Programs High-End Instrumentation grant. This research used resources of the APS, a US Department of Energy (DOE) Office of Science User Facility operated for the DOE Office of Science by Argonne National Laboratory.