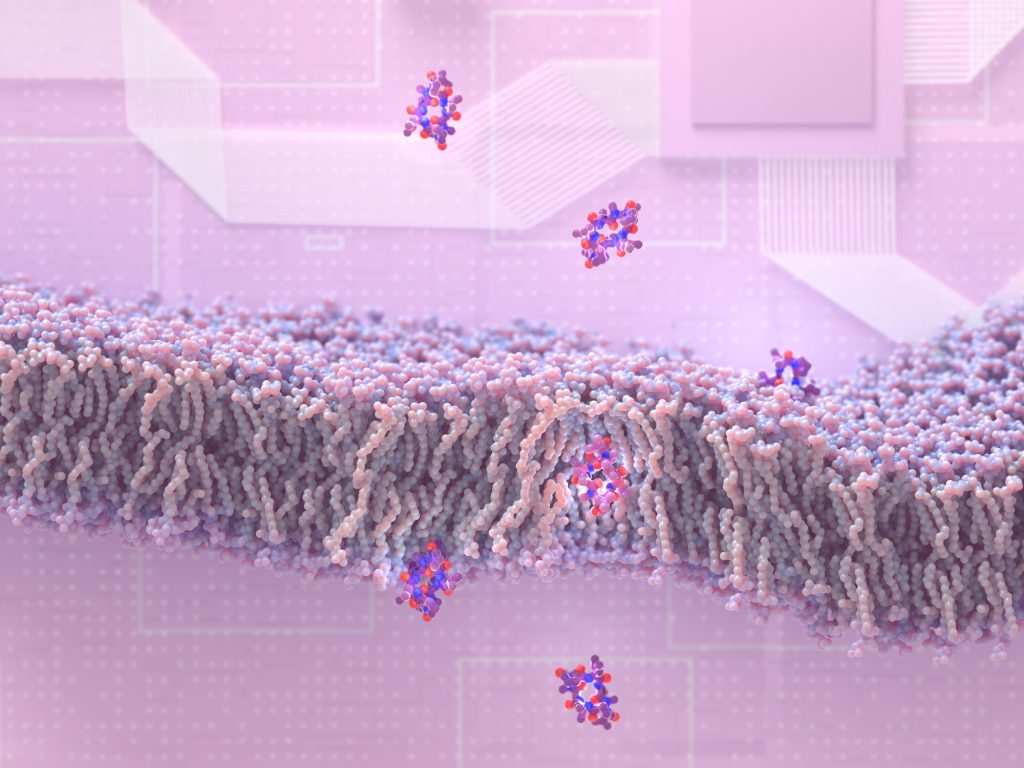 Researchers at the Institute for Protein Design have discovered how to create peptides that slip through membranes and enter cells. This drug design breakthrough may lead to new medications for a wide variety of health disorders, including cancer, infection, and inflammation. This research appears in the journal Cell [PDF].

Gaurav Bhardwaj, Adam Moyer, Naozumi Hiranuma, Patrick Salveson, and David Baker at the UW Medicine Institute for Protein Design have co-founded a new company, Vilya, Inc., with ARCH Venture Partners that is licensing the platform and molecules described in the paper.

“We know that peptides can be excellent medicines, but a big problem is that they don’t get into cells. There are a lot of great drug targets inside our cells, and if we can get in there, that space opens up.”

Discovering how to send peptides through membranes was a chemical problem. “Membranes are made of lipids, and most peptides have chemical features that cause them to hold onto water molecules. Dragging these water molecules through the lipids is difficult,” explains Bhardwaj. The scientists tried several solutions. They first crafted peptides with chemical features that reduce interactions with water. In another approach, they designed peptides that could change shapes while crossing membranes.

To evaluate their new peptide design strategies, the team synthesized over 180 custom molecules. Laboratory tests on artificial membranes revealed that most of the peptides could pass through lipids as desired. Further tests involving gut epithelial cells led the scientists to believe that some of the new peptides could make the jump from the stomach into the bloodstream. Animal studies confirmed that when swallowed, some of the peptides could efficiently move out of the gut, cross several membranes, and enter living cells.

The Core Research Labs at the Institute for Protein Design determined high-resolution structures for 36 of the new compounds, confirming that the peptides adopted the precise shapes that the designers intended.

“These molecules are promising starting points for future drugs. My lab is now working to turn them into antibiotics, antivirals, and cancer treatments,” said Bhardwaj.

Scientists at the University of Washington developed the design methods, created the new peptides, and performed some laboratory tests. Permeability using gut epithelial cells was measured in the David Craik lab at the University of Queensland. Structural characterization of the new peptides was performed by the Gaetano Montelione lab at Rensselaer Polytechnic Institute.