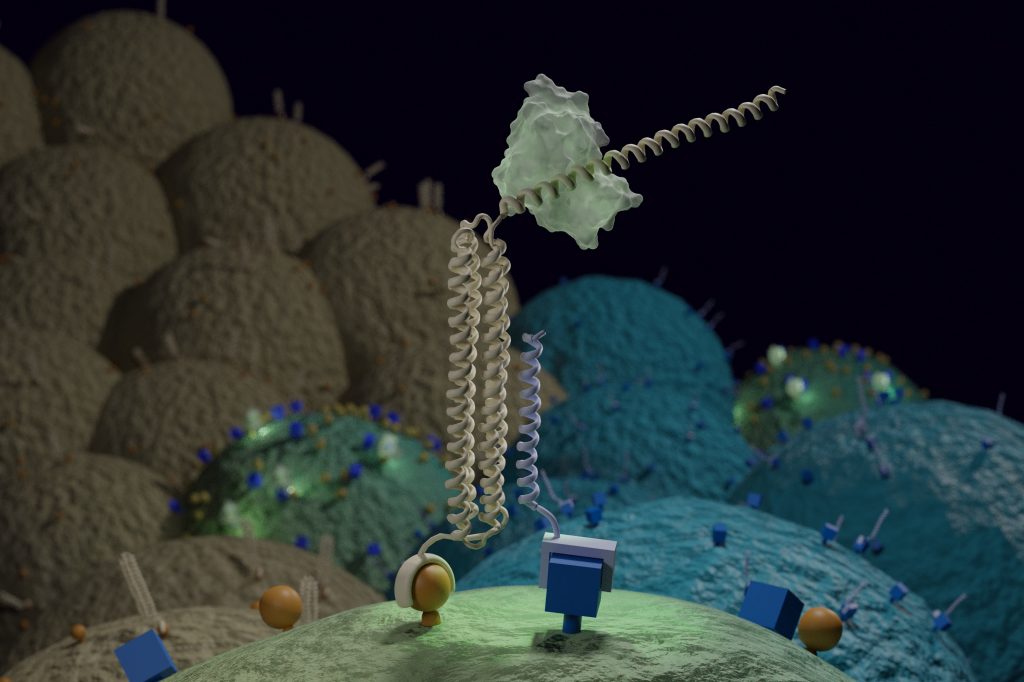 In a new paper [PDF] appearing in Science, a team of IPD researchers together with colleagues at UW Medicine and Fred Hutchinson Cancer Research Center demonstrate a new way to precisely target cells — including those that look almost exactly like their neighbors. They designed nanoscale devices made of synthetic proteins that target a therapeutic agent only to cells with specific, predetermined combinations of cell surface markers.

These ‘molecular computers,’ which are based on the LOCKR system, operate all on their own, searching out the cells that they were programmed to find.

“We were trying to solve a key problem in medicine, which is how to target specific cells in a complex environment. Unfortunately, most cells lack a single surface marker that is unique to just them. So to improve cell targeting, we created a way to direct almost any biological function to any cell by going after combinations of cell surface markers.”

The tool they created is called Co-LOCKR, or Colocalization-dependant Latching Orthogonal Cage/Key pRoteins. It consists of multiple synthetic proteins that, when separated, do nothing. But when the pieces come together on the surface of a targeted cell, they change shape, activating a sort of molecular beacon.

The presence of these beacons on a cell surface can guide a predetermined biological activity — like cell killing — to a specific, targeted cell.

The team showed that Co-LOCKR can focus the cell-killing activity of CAR T cells. In the lab, they mixed Co-LOCKR proteins, CAR T cells, and a soup of potential target cells — some had just one marker, others had two or three. Only the cells with the predetermined marker combination were killed by the T cells. If a cell also had a predetermined “healthy marker”, that cell would be spared.

This cell-targeting strategy relies entirely on proteins, which sets it apart from most other methods that rely on engineered cells and operate on slower timescales.