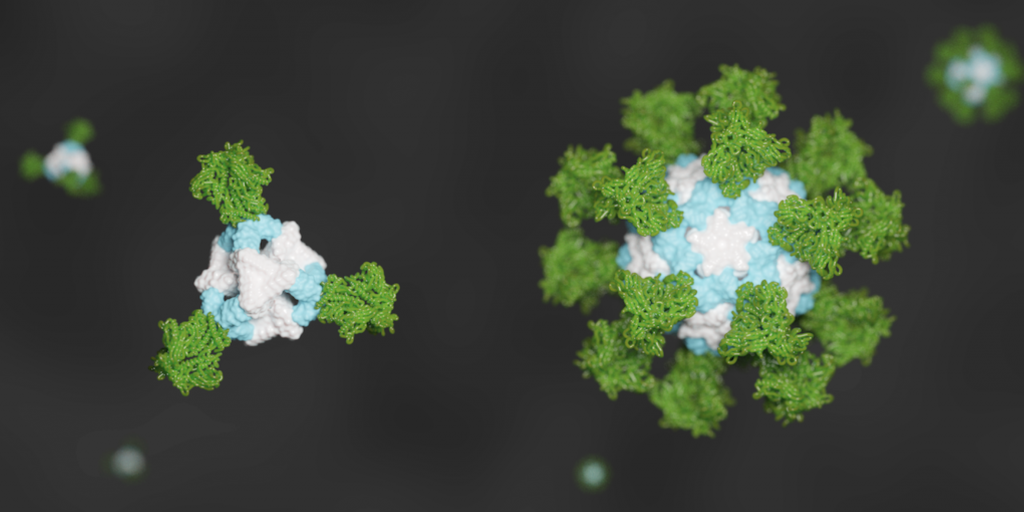 IPD researchers have developed a new vaccine design strategy that could confer improved immunity against certain viruses, including those that cause AIDS, the flu, and COVID-19. Using this technique, viral antigens are attached to the surface of self-assembling, de novo designed protein nanoparticles. This enables an unprecedented level of control over the molecular configuration of the resulting vaccine. This research, which includes collaborative pre-clinical evaluation of initial vaccines in animals, is detailed in three new papers published on August 4.

The first paper, published in the journal eLife, describes the overall vaccine design strategy and how it was used to create vaccine candidates for three important viruses: HIV, RSV, and influenza.

“One of the things we found in this study was that putting the same viral antigen on different nanoparticles alters which regions antibodies can see. This can be used to bias the immune response towards certain regions of an antigen that confer greater protective immunity.”

The second paper, published in PLOS Pathogens, looks at how one of the new HIV vaccine nanoparticles performed in rabbits. A team led by Aleks Antanasijevic and Andrew Ward at Scripps Research found that repeated immunization of the vaccine resulted in a higher proportion of neutralizing antibodies compared to immunization with the same antigen not displayed on the nanoparticle.

The third paper, published in npj Vaccines, looks at how one of the HIV vaccine nanoparticles circulates through the body of rhesus macaques. A team led by Jacob Martin and Darrell Irvine at MIT found that after three days, it became concentrated in lymph node tissues, which is where B cells learn how to fight infection. This may account in part for the observed enhanced immunity.

“Simply injecting an antigen is not necessarily enough to confer a protective immune response. Our goal was to create new protein-based vaccines that mimic the repetitive and spiky shape of a virus because this can drive a more protective immune response. What we found in this study was that the nanoparticle vaccines are also retained better in lymph nodes than antigen alone.” said Ueda.

The team chose to focus on HIV, RSV, and influenza because those viruses all contain surface proteins with similar shapes — trimers. The virus that causes COVID-19 also contains a trimeric surface protein. Efforts are now underway at UW Medicine and at the National Institutes of Health Vaccine Research Center to develop nanoparticle vaccines against COVID-19 using this new strategy.

“We have found that the two-component nanoparticles we’ve been designing can be used to improve the potency of antigens from a number of important pathogens, including SARS-CoV-2. We’re convinced that they are a robust and versatile platform for designing nanoparticle vaccines.”

This work was supported by the Bill and Melinda Gates Foundation and the Collaboration for AIDS Vaccine Discovery; the National Institute of Allergy and Infectious Diseases Center for HIV/AIDS Vaccine Immunology and Immunogen Discovery, Center for HIV/AIDS Vaccine Development; and by the National Science Foundation; and by The Audacious Project; and by the Howard Hughes Medical Institute. This work was also supported by the European Union’s Horizon 2020 research and innovation program. This work was partially funded by IAVI with the generous support of USAID, Ministry of Foreign Affairs of the Netherlands, and the Bill & Melinda Gates Foundation.