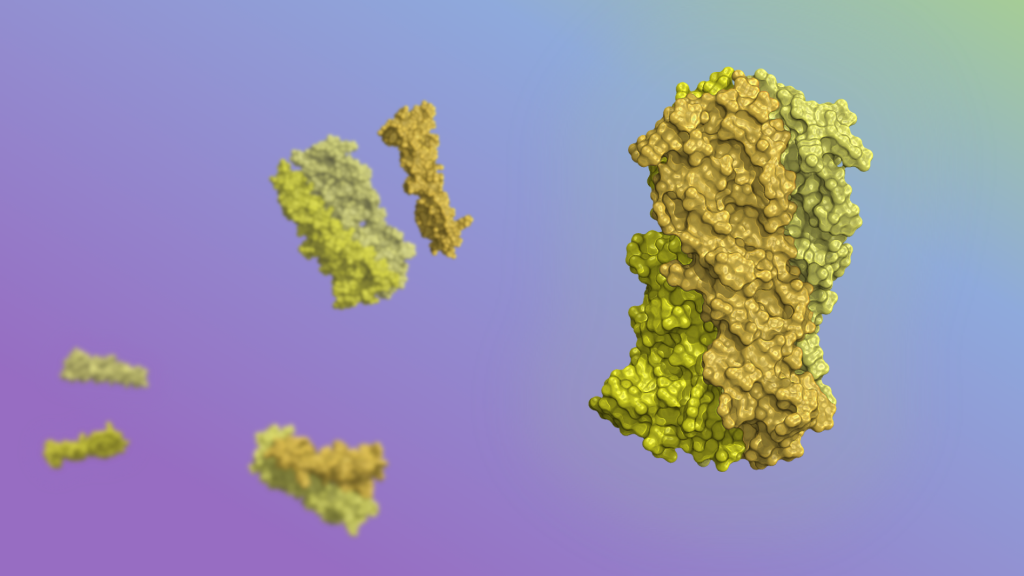 Natural proteins often shift their shapes in precise ways in order to function. Achieving similar molecular rearrangements by design, however, has been a long-standing challenge. Today, a team of researchers lead by scientists at the IPD report in Science the rational design of synthetic proteins that move in response to their environment in predictable and tunable ways.

The team, which included researchers from UW, HHMI, LBNL, and OSU, set out to create pH-responsive oligomers, or pROs, that self-assemble into designed configurations at neutral pH and cooperatively disassemble at lower pH.

The project was lead by Scott Boyken, a recent postdoctoral fellow in the lab, who used a three-step procedure to create the dynamic proteins: first, parametric design was used to create helical-bundle backbones which were then fitted with histidine-rich hydrogen-bond networks using the HBNet algorithm. Finally, for each pRO, the remainder of the new protein sequence was assigned using Rosetta.

“Designing new proteins with moving parts has been a long-term goal of my postdoctoral work,” said Boyken. “Because we designed these proteins from scratch, we were able to control the exact number and location of the histidines. This let us tune the proteins to fall apart at different levels of acidity.”

Collaborators in the Wysocki Lab at OSU used native mass spectrometry to determine the amount of acid needed to cause disassembly of the proteins. They confirmed the design hypothesis that having more histidines at interfaces between the proteins would cause the assemblies to collapse more cooperatively.

Researchers in the Lee lab were able to show that these pROs can disrupt artificial membranes in a pH-dependent manner, mirroring the behavior of natural membrane fusion proteins which also contain amphipathic helices.

Follow-up experiments with the Lippincott-Schwartz lab showed that these proteins can also disrupt endosomal membranes in mammalian cells, making pROs an attractive tool for engineering the delivery of biologics into the cytoplasm through endosomal escape.