After designing one of the most therapeutically promising synthetic proteins to date, Franzi will be taking her many talents to Amazon. 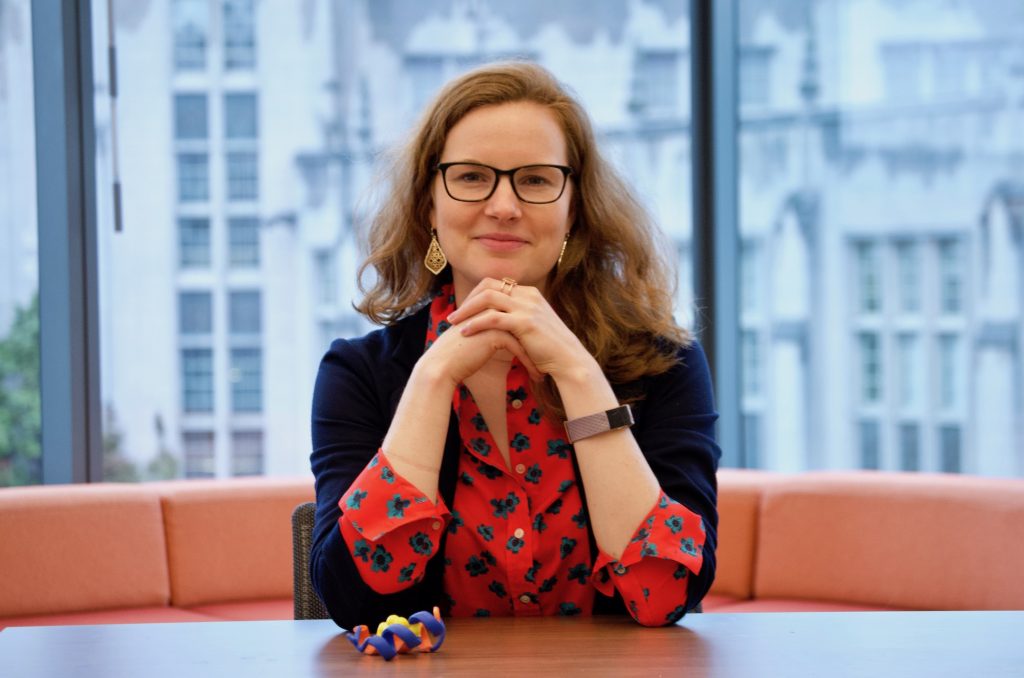 In college, Franziska Seeger spent almost all her free time pulling genetic material out of human brain tissue and blood.

As a volunteer at the Max Planck Institute of Neurobiology in Germany, she was hoping to find molecular clues about the origin of a disease that she knew all too well. Franzi was ten when her mother was diagnosed with multiple sclerosis. The lab she volunteered in was looking for gene expression patterns linked to the illness.

“It was not very satisfying just to keep reading that we didn’t understand it,” she recalls.

That ambition, combined with an early exposure to cutting-edge biomedical research, would lead her to the central question that has guided her research career ever since: “How can we fix broken systems with proteins?”

Franzi grew up in Georgsmarienhütte, a small industrial town in northwest Germany. High school classes sparked a general interest in science, as did occasional trips to Berlin to visit her scientist uncle. A college course in structural biology helped narrow her focus. “This is hard,” she recalls thinking, “but worth figuring out.”

After completing an undergraduate thesis in crystallography at Technische Universität München, she wanted to dive deeper into the molecular basis of disease. Franzi enrolled in a PhD program at the University of Maryland, Baltimore County, where she devoted herself to an enzyme associated with heart disease.

“Soluble guanylate cyclase has it all,” she says through a smile. It interacts with a gas (nitric oxide), has a cofactor (heme), contains a regulatory domain (PAS), and is a heterodimer with its active site at the interface.

With a fellowship from the American Heart Association to study the enzyme, Franzi soon found herself co-advised by John Tainer at the Lawrence Berkeley National Laboratory. It was a high-profile, scienstist- and postdoc-heavy group. “They whipped me into shape,” she recalls. “That was a really fun time.”

Putting the right ideas together

Franzi joined the Baker lab as a postdoc in October of 2014 after a Berkeley Lab colleague interested in Foldit helped her discover Rosetta. She arrived knowing she wanted to design useful binders, but soon found a 9c boulder standing in her way: despite a growing list of design protocols, no one seemed to know how to create good binding interfaces from scratch.

“At that time, people just did not do flexible backbone design” she says. Nor were competing interface design protocols ever directly pitted against one another. “I asked people how they did design and everyone had their own protocol.”

Franzi’s insight was to help organize a team of graduate students and other postdocs to systematically test all available interface design protocols. Were bad scaffolds the root of the lab’s shortcomings? Or did certain protocols just need to be optimized? “We hypothesized about why [de novo interface design had failed], and addressed each hypothesis systematically,” she explains.

The team focused their massive binder design efforts on seven therapeutically relevant targets, including human interleukin 17, a pro-inflammatory cytokine implicated in autoimmune disease. Their first synthetic DNA chip, which was the largest in the lab’s history, produced enough seeds of success to guide a second round of design. From that, a fully synthetic IL-17 binder was born.

Franzi is quick to point out that her success, like all success, was a team effort. New synthetic miniprotein scaffolds that sat in deep energy wells had recently become available, allowing the team to break free from fixed backbone design. Regular project meetings were also essential for defining problems and detailing the right systematic approach. “Someone really smart once told me that innovation requires putting the right ideas together,” she says.

Her advice to other young scientists: “Be patient in identifying the problem you want to work on — then run with it. That’s hard to do, especially if you come from an experimental background.”

It’s ok to say no to new work when your plate is already full, she adds.

Franzi will long be remembered for her contributions to lab culture, especially chocolate Wednesdays. She and David are both big fans of Dandelion chocolate.

Her desire to fix broken systems with proteins hasn’t changed, though the details of Franzi’s next project with Amazon are under wraps. “I’m excited to be taking the skills that I have and applying them to new problems,” she says.