On Friday, May 20, 2016, three of our undergrads participated in the 19th annual Undergraduate Research Symposium. Tessa Howard, Kara Lau, and Vanessa Nguyen presented posters on projects/topics stemming from their work done in our labs. We’d like to recognize the excellent job they did on their presentations! Please see below for their titles and abstracts. 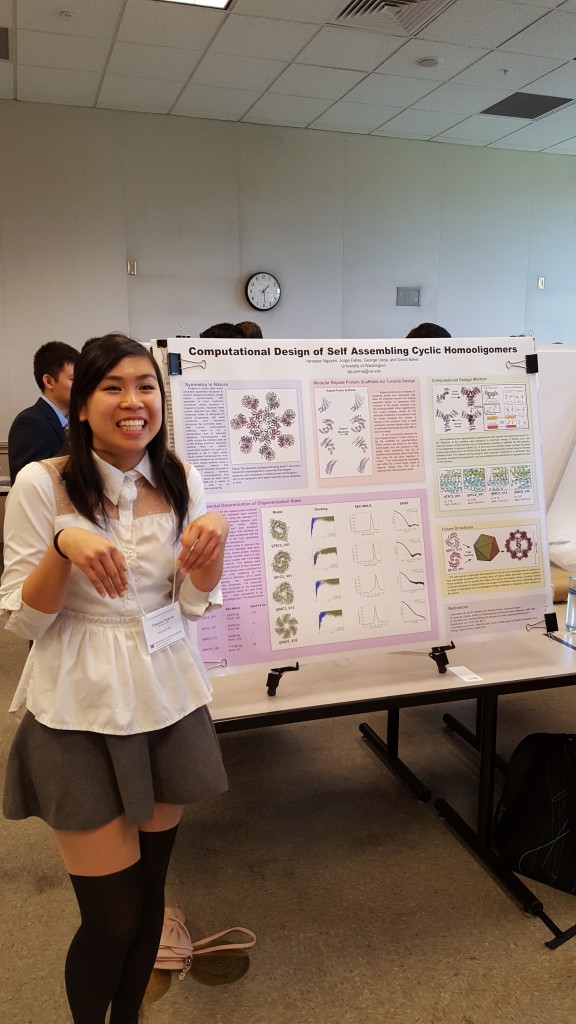 Protein homooligomers, multibodied assemblies built from identical polypeptide chains, comprise a large fraction of known cellular proteins. Homooligomers prove to be particularly amenable for many biological applications; they hold the potential as oligomerization domains, often have enzymatic functionality as a byproduct of their oligomeric configuration, and can serve as structural scaffolds for bionanomaterials. While there exists a multitude of protein homooligomers in the Protein Data Bank, the finite number of existing homooligomers limits the potential for custom applications. Our current work involves designing novel cyclic protein homooligomers from a set of de novo designed repeat proteins that share no sequence or structural homology to any known protein structures. We chose these proteins because of their modular properties, large variety of topologies, and unprecedented thermostability. Using the Rosetta software suite, we generated a set ofde novo homooligomer models by designing the oligomeric interface to direct self-assembly into a target configuration with two to six identical chains. After a round of refinement, we will express the designs in Escherichia coli and purify them by immobilized metal affinity chromatography. Their oligomerization state will be validated by measuring the molecular weight in solution by size exclusion chromatography paired with multi-angled light scattering and comparing it to the predicted molecular weight of the design. Designs that exhibit the desired molecular weight will be submitted to collaborators for small angle X-ray scattering data and X-ray crystallography. The exclusive use of de novo proteins in homooligomer design grants a greater control over the shape and stability by nature of the repeats, thus making one successful interface design useful for a multitude of shapes and sizes. This variability opens up a wide scope of scaffolds for bionanomaterial engineering. 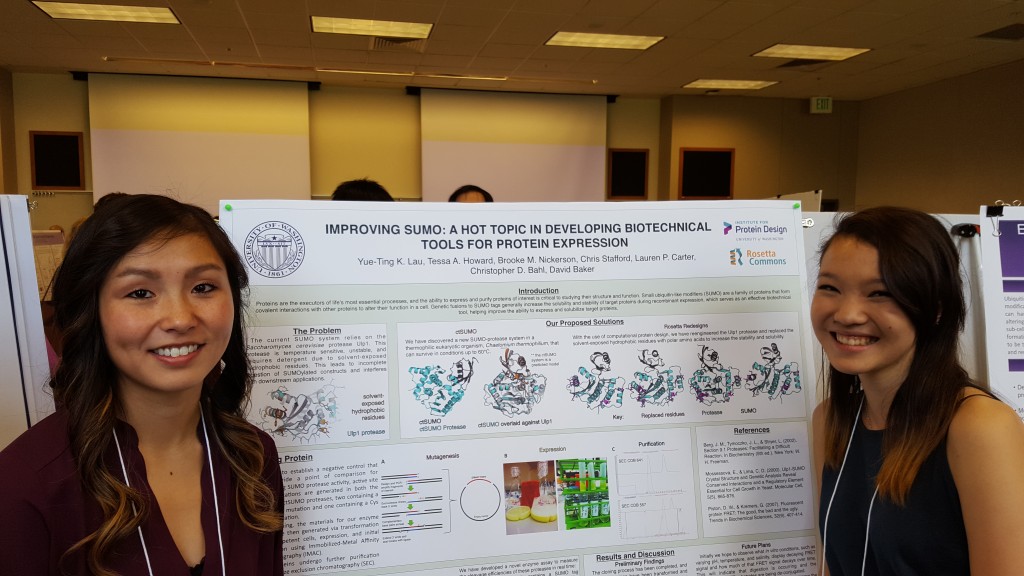 Proteins are the executors of life’s most essential processes, and the ability to express and purify proteins of interest is critical to studying their structure and function. Genetic fusions to small ubiquitin-like modifier (SUMO) tags generally increase the solubility and stability of target proteins during recombinant expression. Following purification, the fusion protein can be cleaved by the highly specific SUMO protease, leaving the target protein intact and unmodified. This specificity attests to the use of the SUMO protease as a powerful biotechnical tool. The current SUMO system relies on the Saccharomyces cerevisiaeprotease Ulp1. However, this protein has considerable limitations in that it is temperature sensitive and requires detergent to maintain stability, which can interfere with downstream applications. Furthermore, Ulp1 instability often leads to incomplete digestion of SUMOylated constructs and can nucleate aggregation of target proteins. We sought to improve the current system by two orthogonal approaches. First, we mined genomic information from thermophilic organisms for homologous proteins. We have identified and experimentally characterized a novel SUMO-protease system from, Chaetomium thermophilium, a eukaryote that can grow in compost up to 60°C. Second, we used computational protein design with Rosetta to reengineer S. cerevisiae Ulp1 to enhance the stability and solubility of this protein. Using a novel fluorescence resonance energy transfer (FRET) based reporter assay that we have developed to monitor protein cleavage, we can characterize the SUMO systems and evaluate their efficacy. This assay allows for assessment and optimization of protease digestion in varying temperature, pH, and salinity conditions. These SUMO protease systems that we have uncovered and redesigned allow for the ability to circumvent many of the issues associated with the current Ulp1 system by offering an alternative, enhanced tool for the purification and expression of recombinant protein in laboratory research settings.